On May 2, 2016, the U.S. Supreme Court granted review of the Sixth Circuit’s August 2015 ruling in Varsity Brands Inc. v. Star Athletica LLC[i] The Supreme Court will determine the proper test to assess whether Varsity’s two-dimensional cheerleading uniform designs are entitled to copyright protection. Notably, this is the first time the Supreme Court will address copyright protection in the context of useful articles and apparel. Thus, its decision bears the potential for a far-reaching impact on the apparel and fashion industries. 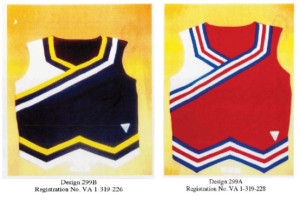 Star markets and sells uniforms and accessories for various sports, including cheerleading. Star circulated marketing materials for cheerleading uniforms strikingly similar to Varsity’s five registered designs. After encountering these advertisements, Varsity filed suit against Star in the Western District of Tennessee, alleging five claims of copyright infringement for “selling[,] distributing, [and] advertising … goods bearing .. design[s] that [are] copied from and substantially similar” to Varsity’s designs.[x]

At the district court level, both parties filed motions for summary judgment. Star asserted that it was entitled to summary judgment on Varsity’s copyright-infringement claims on the grounds that Varsity could not establish ownership of a valid copyright. Specifically, Star purported that (1) Varsity’s designs were for useful articles and therefore not entitled to copyrightability; and (2) the pictorial, graphic or sculptural elements of Varsity’s designs were not physically or conceptually separable from the uniforms, likewise making the designs ineligible for copyright protection.[xi]

On appeal, the Sixth Circuit reversed. Significantly, it reviewed a multitude of different tests set forth by the various circuit courts in determining the copyrightability of useful articles. Ultimately, it constructed a five factor test to determine whether “pictorial, graphic, or sculptural features” are conceptually separable from the utilitarian function of a useful article.[xiii] In applying the test, the Sixth Circuit concluded that the graphic features of Varsity’s designs “can be identified separately from, and are capable of existing independently of, the utilitarian aspects of” the cheerleading uniforms, i.e. the useful article.[xiv] Thus, it found that Varsity’s graphic designs constitute copyrightable subject matter.

Following this decision, Star appealed to the U.S. Supreme Court, focusing its petition for certification on the need to clarify which of at least ten tests used by the various circuit courts should be applied in determining whether a design feature on a useful article is entitled to copyright protection.[xv] In granting certiorari, the Court noted it will determine one issue on appeal - “[w]hat is the appropriate test to determine when a feature of the design of a useful article is protectable under § 101 of the Copyright Act?”[xvi]

Because little protection currently exists for fashion designers under U.S. Copyright law, the Court’s decision has the potential to significantly impact the fashion industry and related markets. Until now, the fashion industry has longed for clarity to determine whether a design feature on a useful article is subject to protection under U.S. copyright law. Should the Court rule in favor of Star and support application of a more preclusive test, this decision could change the legal landscape for copyright plaintiffs and defendants in apparel cases, making it more difficult to protect such designs.