George Wall Elected to Chapman University’s Board of Trustees

Glaser Weil LLP is pleased to announce George Wall, partner and chair of the Mergers & Acquisitions Department has been elected to Chapman University’s Board of Trustees.

The Orange County based comprehensive liberal arts and sciences university welcomes Mr. Wall to its group of 39 prestigious trustees.

The Board of Trustees is among one of three governing boards, which also includes the Board of Governors and the President’s Cabinet. According to Chapman’s website, the university's goal is to provide the transparency of operation that the university's entire community, including its neighbors, faculty, parents, students as well as other constituencies, expect from it.

Mr. Wall is one of the leading merger and acquisition attorneys in Southern California.  He is a Senior Partner in the Firm’s Corporate Department where he is Chair of the Mergers & Acquisitions Department. His practice focuses on mergers, acquisitions, recaps, sales and reorganizations; venture capital transactions; securities; broad-based tax planning; fund formations; and preparation of loan documentation. Mr. Wall has a Martindale-Hubbell legal rating of AV, the highest achievable, has been named every year to the Orange County Business Journal's “OC 500,” which recognizes the most influential individuals from throughout Orange County, and has been repeatedly included on the Southern California Super Lawyers list. 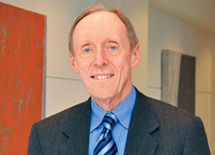 George Wall
Partner and Chair of the Mergers & Acquisitions Department