Glaser Weil’s attorneys have always nurtured a vigorous, deeply engrained commitment to serving the communities in which we practice and live. Our attorneys are actively engaged in pro bono work in a variety of ways, including as pro bono counsel for victims of domestic violence seeking restraining orders against their offenders, and as volunteers to various legal clinics assisting some of Los Angeles’s most underserved citizens. Glaser Weil remains firm in its long-standing involvement with charities and civic organizations throughout California, where the Firm's lawyers serve as trustees, commissioners, members of boards of directors, and in other capacities.

Glaser Weil partnered with Bet Tzedek and the office of Assemblymember Miguel Santiago to host a Family Preparedness Workshop and Clinic designed to inform parents about the steps they need to take to ensure their child’s safety, well-being and care should the parents be removed from the United States.  The greater Los Angeles community faces the possibility of an unprecedented crisis, with thousands of children living in “mixed-status families” (i.e., families where at least one parent is undocumented and therefore at risk of removal from the United States), creating the possibility of these children being left without anyone with the legal authority to care for the child or the ability to address critical issues such as enrolling a child in school or authorizing medical treatment.  At the clinic, the Firm’s attorneys, along with Bet Tzedek’s staff and volunteers, assisted parents in drafting simple but critical documents, such as Caregiver Affidavits, and other documents that can serve as a safety net for their children.

Glaser Weil has partnered with the Legal Aid Foundation of Los Angeles (LAFLA) to assist with cases involving domestic violence restraining orders.  LAFLA offered an MCLE-eligible training for the Firm’s attorneys regarding representation of clients who previously obtained temporary restraining orders and who need assistance preparing for and appearing at hearings to determine whether the temporary order should be extended.  The Firm’s attorneys learned that these domestic violence restraining order hearings resemble mini-trials, and as in many of the cases the Firm handles generally, evidence is presented in the same way as in a civil trial - through witness testimony and admission of documentary evidence, which generally includes police reports, photos and medical records.

Glaser Weil works with Esperanza Immigrant Rights Project (Esperanza) to advocate on behalf of unaccompanied minors seeking asylum.  Esperanza offered an MCLE-eligible training at the Firm’s Century City office regarding these cases, whereby attorneys assist unaccompanied minors who entered the United States prepare an asylum application process, prepare the minor for the interview, and then accompany the minor to his/her hearing before an asylum officer with USCIS. 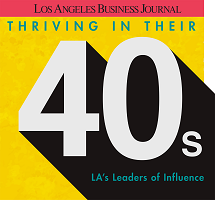 We are pleased to announce that Matthew Jann, partner in Glaser Weil's corporate practice, has been named to the Los Angeles Business Journal's "Leaders of Influence: 2022 Thriving in Their 40s" list, a selection of Los Angeles’ leading professionals in their 40s.